Maybe this is a simple thing and I’m just a dub who doesn’t know or remember. I couldn’t find an answer thru searching online.

So…I have a UR10e. It likes to take off if I accidently double tap the jog key just right. It will drive off in whatever direction I tapped for about 3-4 inches. Unless it crashes into something, which in most cases it does. Anyone know how to turn that wonderful little feature OFF?

Haven’t seen this in jog mode yet, but it has started happening in the program tab to the vertical scroll bar:

Tap the up or down arrow just right and it will scroll 'til it hits the end or you stop it.

It’s not a software feature

Possibly there is a hardware issue with touchscreen.

My touchscreen is less than 3 months old and this behavior JUST started. Is there a warranty that, if this is the issue, will cover this?

I think it’s more software than hardware. Or rather, the hardware isn’t faulty, it’s just weak. If you hold to jog, then flood the robot with socket requests, for example, it can’t spare any time to register that you took your finger off. So it just keeps jogging until the other robot comms have cleared. So what’s probably happening with “double tapping” is similar in that it gets stuck trying to process “move forward - stop - move forward - stop” rapidly, in addition to other various things running on the controller. That’s just my guess though.

It did it again to me the other day. I watched the screen. It showed the arrow grayed out as if I was holding it down. I got it to do it 2 or 3 times. On the third time I touched another part of the screen when it locked up and it seemed to snap out of it.

Someone mentioned maybe it was moisture from my fingers? Either way I’m not liking the responses. It’s a real let down when you watch one of your nice finished parts get dragged accross a table or your vacuum gripper get mangled.

Here is a video of the robot taking off on me. Luckily this time it wasn’t colliding with anything. You can see I’m walking away from the controller but it continues to move up in the Z. I’m so used to it doing this now that I didn’t really react to it. 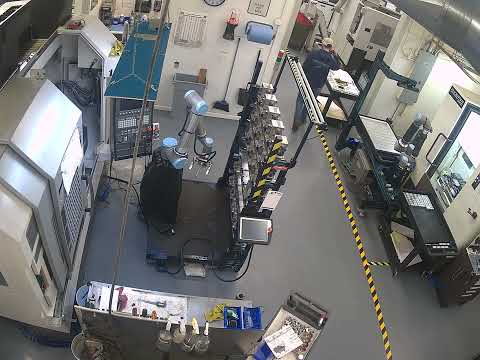 I’ve had that same ‘runaway’ issue with my second robot. After a day of heavy programming it began to creep on my during teach. A simple reboot would solve the issue.
I used to have a video, but sadly it seems that is lost.

I never had it again once the cell was in production but i would imagine the script to clean up old files might help here.

Below is the custom Magic File I’ve written to remove the .old files. I’ve been told by UR in the past that custom magic files are discouraged, so use at your own risk. I’ve used it, and a few others have as well and haven’t reported anything wrong though.

Now, it just deletes any file that has .old in it’s name, so I’m kinda assuming you don’t have any REAL programs with that in their name. Should only find it as an extension.

I would definitely recommend backing up all your programs with that magic file first, JUST IN CASE, but I ran this on my robot just a bit ago and can confirm all the .old files are gone. In both the root, and any subfolders (and sub folders inside those. It does it recursively).

The forum won’t let me attach the file by itself, so I put it in a zip folder along with the “Backup All Programs” file. If you haven’t used a Magic File before, just copy and paste it to the root of a flashdrive and then insert it into your Teach Pendant. A little red “! USB !” will show up, and eventually a green “< USB” will appear. Don’t remove the flashdrive until you see the green text.

And you’ll want to run them one at a time, so put just the Backup All programs on there, then once it’s done, remove it from the flashdrive and put the removeOld file on there and reinsert it.