I am using the ur_rtde by SDU Robotics to query the position of a UR10e about 500 times per second. The UR’s tcp moves back and forth parallel to the UR’s y axis. I query the position and find the change in xyz position from the previous query and print the xyz change to the console. I would expect to see the console print positive y values, then when the robot changes direction, the console will show negative values. Instead, the y values change sign well after the UR changes direction, and the delay gets worse as the program runs. Has anyone else encountered this issue or something similar?

Not sure if this is relevant but:

Thanks but it is not

I see that you’ve raised it as an issue on their repository. Probably the right move. If someone there solves it for you, definitely post a solution back here 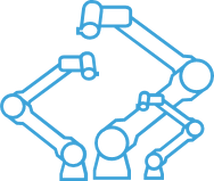 I have a C++ program that gets a UR's TCP pose 500 times per second and prints the result to the console. While the c++ application is running,...

We were running ur_rtde 1.4.7 and we have rolled back to 1.4.3 which seems to have remedied the issue. Our tests look good but we haven’t integrated 1.4.3 into our application yet so we can’t be sure this is a solution.

Great to hear, I’m going to post your colleague’s snippet here too in case anyone else has to troubleshoot something similar:

Anders, I work along side Calvin. We just ran a test to see what is going on, see below; We ran these tests with very simple code position = getActualTCPPose(); print(position[1]); Using - c++ project version 1.4.7 result: the current bug in this thread… latency with positional data being returned Using - python project version 1.4.3 result: no latency. working properly, returning exact positional data as UR moves back and forth along the y axis We then went ahead and pulled down the C++ project version 1.4.3 and compiled that. This works, so the issue is something in the later versions fyi.